Richard’s health transformation
As he searched for work, food provided comfort. Richard Hubbard, a webmaster from Connecticut with a degree in Art & Design became obese after graduating from college. A binge-eater, he turned to food for comfort at a time when he was struggling to find work. Read about his health transformation, losing 120 lbs, from a plant-based diet. Continued below…

Haarlem bans meat advertising
It was back in 1971 that American network television banned cigarette commercials. In perhaps the most notable advertising ban in fifty years, the Dutch city of Haarlem, located twenty miles from Amsterdam, has banned the advertising of meat products in public spaces around the city, despite blowback from the meat industry. The regulation is in alignment with Holland’s national initiative to reduce livestock herds to reduce greenhouse gas emissions, as The Beet reports.

New rules proposed by FDA
New rules have been proposed by the Food and Drug Administration for nutrition labels that can be put on the front of food packages to assert that they are “healthy.” Expect vigorous contestation of these rules from the food industry before they will be put into effect, if they ever are. But there’s reason to expect, according to the Washington Post, that the “healthy” label will not promote foods high in saturated fat and sodium, and that the regulations will follow recent dietary guidelines that advocate consumption of vegetables, fruits, whole grains, legumes, nuts, and seeds.

One Green Planet describes how aquaculture, now responsible for approximately 40% of all fish consumed in the U.S. annually, has become as filthy an industry as pig factories. With the aquaculture industry growing at three times the rate of land-based animal agriculture, an exposé of the industry is overdue. 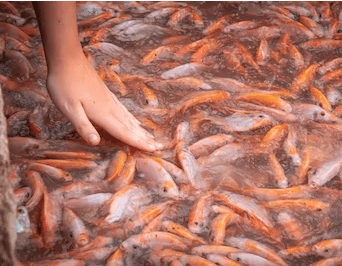 “Light exposure speeds up the rate at which fish grow, so some fish are exposed to light 24 hours a day. While this might make fish grow faster, it also negatively impacts the fish’s immune system, making them more susceptible to disease.” The use of antibiotics and “protein pellets” (made of fish) in aquaculture also recalls land-based animal agriculture. The fish raised in fish farms are highly susceptible to parasites and infections, in the same way as land animals raised in unnatural, crowded conditions.

As he searched for work, food provided comfort. Richard Hubbard, a webmaster from Connecticut with a degree in Art & Design became obese after graduating from college. A binge-eater, he turned to food for comfort at a time when he was struggling to find work. Read about his health transformation, losing 120 lbs, from a plant-based diet. Continued below… 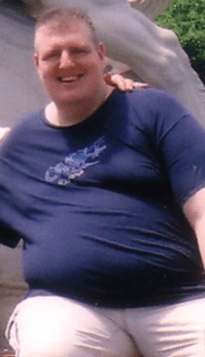 NESTLÉ has pledged to cut ties with an Indonesian palm oil firm
whose farming practices have stoked the ire of environmentalists, Bloomberg reports. The Indonesian company stands accused of land seizures, ruinous environmental practices, and human rights abuses. Nestlé pledges to replace its supplier by the end of the year. 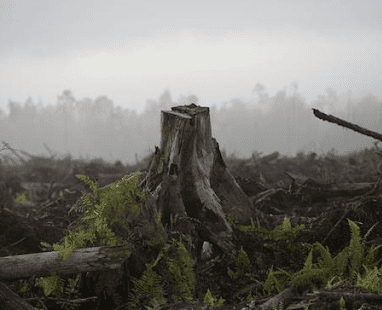 The Botanic Gardens Conservation International (BGCI) has come out with a new paper warning that billions of people could lose their livelihoods if more is not done to prevent tree species extinction. Currently, one-third of the tree species on earth are threatened with extinction.

Trees provide habitat for half of the world’s animal and plant species, so much more is at stake even than human livelihoods. The cycling of carbon and water throughout the world’s ecosystems is also profoundly dependent upon healthy trees. The leading cause of deforestation, of course, is animal agriculture.

Richard Hubbard is a webmaster who grew up in Connecticut, and holds a BFA in Art & Design from the Pratt Institute in Brooklyn, N.Y. He became obese a few years after graduating from college. A binge-eater, he turned to food for comfort at a time when he was struggling to find work. He would order three or four Big Macs at a time, with French fries. Once, he bravely decided to try to total up the calories he ate on a typical day, and he calculated that he was eating over 8,000 calories on a daily basis!

To lose weight, he tried every fad diet he encountered. He tried diets advertised as high fat, high protein, or low carb. Nothing ever worked. His colleagues at work would give him candy and other extra food in the office; they enjoyed witnessing how much he could eat. His eating disorder was a source of their amusement. 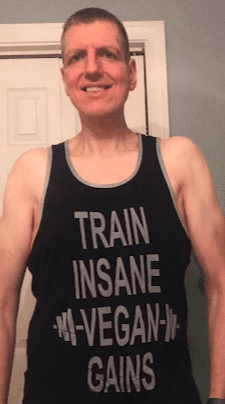 In despair, Richard stopped weighing himself when he reached 345 pounds, but he knows he must have gone a good deal higher, and may have even reached 370. He suffered neuropathy in his feet, and fatigue. It was hard to sleep because the neuropathy would wake him up. He knew there were other medical issues that he was ignoring, and he was afraid to visit the doctor.

Richard is a rare case of someone who lost weight in part because he went to the doctor. In 2012, his sister died from anorexia. The same year, his health insurance offered him a cost reduction if he went for a physical—something he was not accustomed to doing. But he decided to face his fears and have his health evaluated, so as not to succumb to an eating disorder as his sister had. And so, for the first time in many years, Richard went in for a check-up. The doctor told him that his blood pressure was high, and he was borderline pre-diabetic. The doctor described him as “morbidly obese,” a description that he knew was accurate but that was still a sucker punch to hear spoken aloud by a medical professional. The doctor asked him to come back in two weeks, and if his blood pressure didn’t improve, he would put Richard on blood pressure medication.

His doctor didn’t tell him what to do.

So Richard turned to the internet. He googled “foods to lower blood pressure” and “foods to avoid.” He decided to give up salt, which meant that he needed to spurn fast food joints. He also happened upon an episode of the Dr. Oz Show on which Dr. Joel Fuhrman appeared, touting “G-BOMBS”—greens, beans, onions, mushrooms, berries, and seeds. He’s been eating from these “food groups” ever since.

And so Richard started to reform his diet during those two weeks, cutting way down on the fat and the calories; all the same, when he returned to the doctor, his blood pressure remained high, and he was prescribed medication for his blood pressure.

The thought of taking drugs was anathema to Richard, even though his mother, a nurse, told him “Everyone’s on them.” So he did not fill his prescription. Instead, he kept researching nutrition and modifying his diet. All the evidence he came across pointed to the advantages of a plant-based diet, so that’s the diet he adopted—plant-based, with most of his meals vegan—but not all of them. He made the assumption that he needed to eat some animal foods to get sufficient protein, so he still ate some “no-salt turkey” and some dairy yogurt, ingesting some animal “protein” for a few meals a week. He did not know any vegetarians or vegans, and thought of them as strange people, so he didn’t want to feel that he had taken his new plant-based diet to an “extreme.”

During his first year on a plant-based diet, Richard lost 120 pounds. He lost an additional thirty pounds over next four years on his plant-based, but not vegan, diet. He also exercised regularly because he was experiencing new-found energy. He would use the treadmill for an hour a day almost every day.

Then, in 2016, Richard read Shred It, bodybuilder Robert Cheeke’s guide to burning fat and building muscle. This book motivated Richard to try to go thirteen weeks without animal foods. He took the thirteen-week vegan challenge, keeping a workout journal, and keeping track of the foods he ate. He felt transformed: he gained even more energy, became a runner, lost ten more pounds, and built more muscle.

Today, Richard does all he can to spread the message of a low-fat, whole foods, vegan diet. He started a website, www.plantbasedrich.com, and wrote a book, The Plant-Based Journey to Health. He is starting a career as a plant-based coach, all the while remaining a full-time webmaster. As a runner, he has completed two half-marathons.

Your support is appreciated!

Sustainable Earth Eating is a 501(c)(3) nonprofit organization, so your donations are tax-deductible. Please consider making a one-time donation or signing up to sustain our work as a monthly donor. Your support is crucial to our vision of a Planet Earth improved by sustainable eating, to our participation in local and national partnerships, and to our work to support and inspire activists doing similar work elsewhere. Click here to donate. If you feel inspired by what we are doing, we would love your support!

Thank you for your consideration!