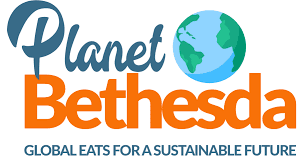 The first-ever Planet Bethesda festival will be held Sunday from noon to 6 p.m. in Bethesda’s Elm Street Park. The festival aims to promote and raise awareness of the benefits of plant-based eating and will feature several local restaurants and businesses. Those include True Food Kitchen, Dog Haus, Bethesda Curry Kitchen, Tikka Masala, Zoe’s Vegan Delight, Eat the Change and Clean Choice Energy.

About 1,000 people are expected to attend the event, according to Jane DeMarines, the executive director of Sustainable Earth Eating, which is co-sponsoring the festival.

Planet Bethesda will also include speakers at a main stage from various organizations promoting environmental sustainability as well as:

In addition to Sustainable Earth Eating, the event is sponsored by the Bethesda-based FARM Animal Rights Movement – a national nonprofit aimed at ending the use of animals for food – and the Physician’s Committee for Responsible Medicine – a Washington, D.C., nonprofit that promotes plant-based diets and scientific research that doesn’t involve the use of animals.

DeMarines said Friday the FARM Animal Rights Movement initially had considered holding the festival on Earth Day, but waited instead until World Environment Day, which is Sunday, because the weather might be more favorable.

Sustainable Earth Eating focuses on raising awareness of the negative environmental impact of meat consumption. DeMarines told Bethesda Beat on Friday that animal agriculture takes up about 80% of all global agricultural land, meaning that the land is used to raise livestock or raise food for livestock.

“There’s drones, for example, that have taken pictures of the rainforest in Brazil showing that the trees are being cut down and what’s replacing them are cattle,” she said. “So the plant-based trend is just really the salvation for the planet, because so [many] resources are using meat.”

DeMarines said animal agriculture is extremely inefficient because it only produces about 20% of the calories needed for the world’s population – a statistic also documented on the website Our World in Data, powered by The University of Oxford.

DeMarines said that while she thinks many people in Bethesda and the surrounding area are aware of the harmful impact of animal agriculture, understanding among U.S. citizens overall is behind that of other countries such as the United Kingdom.

“A lot of people are not aware really of the impact of animal agriculture on the planet,” she said. “There is a huge disparity between the two countries on awareness of the impact of raising cattle on the environment.”

Dan Schere can be reached at daniel.schere@bethesdamagazine.com